I am excited to be writing my first dime post, and I honestly cannot think of many other games I would rather be writing about. 1860 by Mike Hutton is without a doubt one of my top five 18xx games and I only get more excited after each play. It is without question quite an oddball of an 18xx game, with a bunch of weird rules (like running through a single tokened city each run routes phase) and unique train financing and purchasing (insolvency, receivership, and the whole trainless-related restrictions). But there is a light at the end of the tunnel, since once you get a grasp of all that quirkiness, you find an extremely rewarding game beneath.

This play was at my favorite player count, which is three players (the game is great at two players, and fine at four). I often attempt to try and get one of the two opening companies and push to trigger the game end by hitting the end of the market before the other companies can get all their end game trains and routes setup. However, in this play I went in the opposite direction and just slowly built up two good companies with lots of earning potential, and with a little luck, wound up getting excellent tokens for both the C&N and IWNJ. This required withholding a ton and lots of train juggling (the most valuable company at the end of the game, the C&N, withheld in eight of the nineteen operating rounds of the game).

The culmination of the game was incredibly satisfying. The lead player at the time had a nine-share lead on me, and 100% ownership of one of his companies. My original plan was to use my insolvent crappy company to delay the end game triggering a bit to let my huge runs accumulate. However, nine shares behind, it did not matter how big the runs were and I was falling further behind. At this point, I moved a train into the insolvent company and triggered Nationalization. The timing was perfect, as the first round of eliminated companies killed the lead player's 100% held company and none of mine. This got rid of the problem of the share differential, which was great! With that problem solved, the big runs wound up being just enough to take the lead in the final OR. 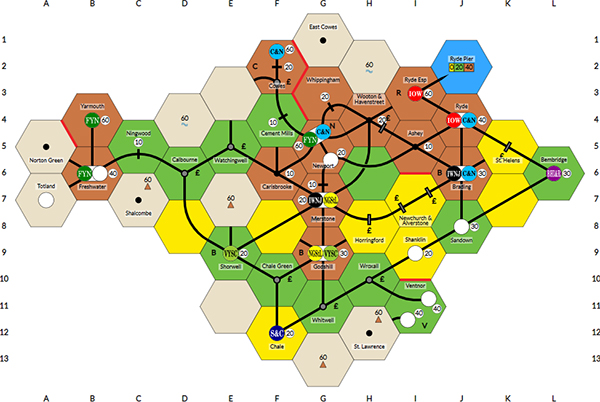 It was fitting that my dime play of 1860 currently stands as my favorite play of the game, and not just because I won. I was finally pulling levers and twisting knobs with intention and the win felt earned. I am not fooling myself into considering this anywhere in the vicinity of mastery, but I do feel like I am now really playing the game instead of the game playing me. I found that light at the tunnel, and now all I want to do is turn around and help others find it as well.

BGG Game Link: 1860: Railways on the Isle of Wight