The newest release from one of my favorite 18xx designers, Leonhard Orgler (aka "Lonny"), finally hit the (digital) tabletop for my first play. Lonny's solo designs, as well as those designed as part of Double-O Games, cover the full spectrum of 18xx games. Some are children of the 1830 family tree, others descend from 1835, and some are kinda their own thing. Often, they are creative and innovative, and our group has nicknamed him the Mad Scientist of 18xx. 1840 is definitely one of those mad scientist games.

I could use most of this post enumerating all the strange quirks of 1840, but that could be found elsewhere and does not provide sufficient insight as to how the game plays. I will instead focus on two major differences 1840 brings to the table. First, the company structure is unlike any other 18xx I have played. After an initial auction of private-type companies, you jumpstart a Tram Company. The Tram Company is only an administrative shell, and the real guts of the operation are these Lines that you bid on to incorporate into your shell. You only have space for three lines, and there is no discarding one that you have already won, so choose wisely (or in my case... unwisely). This structure along with the choose-your-own dividend, gives the game a unique texture. Second, the structure of trains (or trams) technology progresses in an innovative way. Trams don't rust they just incur every increasing maintenance fee as trains of new types are purchased. There is also a less restrictive order from which they are purchased. New trams become available in a procedural way as the rounds progress, and old trams become no longer available. This means there can be jumps in tram technology that can upset tempo and even the best plans, and this happened in our game when one player purchased a tram of the highest technology earlier than anticipated, and maintenance costs skyrocketed. 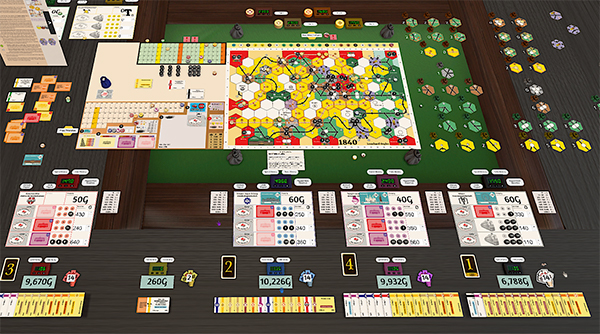 At the end of the day, 1840 is a strange 18xx game, but it is still an 18xx game. Normal 18xx strategies still apply, and in my case, ignoring concepts like company synergies still ends up in defeat. After a single play it is difficult to make any real conclusions, as it takes a full play to grok the quirkiness of the rules and the new concepts introduced. I am certain that I want to play this again soon and see if I can make things work better next time. And even if things do not go better, there is always the feeling of septuple jumping toward the end of the game, which is awesome.