While I have played Winsome's Rail USA, this was my first play of Capstone's version, published as Ride the Rails. One of my favorite aspects of the cube rail genre is that they really span gamut when it comes to weight and playtime. Ride the Rails is the category of light and short, so it the cube rails game to cap off the night when everyone is winding down or short on time. 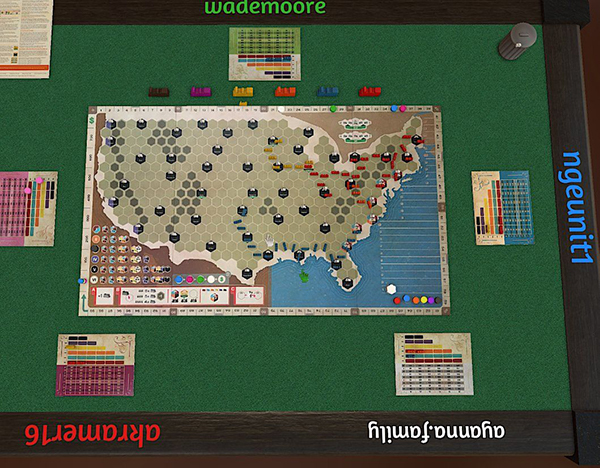 For this round, we played the base USA map. This game shares one of my favorite aspects of another light and short cube rails game, SNCF, where companies have trains/cubes that represent either track on the map or shares in player's portfolios. Which creates a tradeoff between being able to get more shares or build more track, but often not both. There was even a stock round in this play where I was able to take a share of the blue company and block another player from building over to a bonus space since they were now one cube short of being able to do so.

These light and fast cube rail games are a great introduction to players new to the genre and show off the concept of shared investment well. Ride the Rails is especially fun for train gamers and non-train gamers alike. I am not 100% sold on the changes made from Rail USA to Ride the Rails but am interested to see how they feel with a few more plays under my belt.